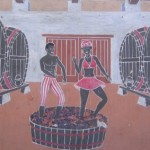 Peru during the early 17th century. Today Peru’s black population is still concentrated in the coastal region where their ancestors first labored in the sugar cane and cotton plantations. As a result, the hotbed for Afro-Peruvian music are the small coastal towns of Chincha  and El Carmen, not too far south of Peru’s capital, Lima. This is home to the styles known as festejo, lando and panalivio. 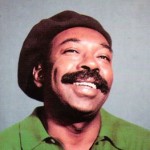 Of the many traditional instruments employed in the Afro-Peruvian styles, the cajón is the main percussive instrument and one could say it is the “heart and soul” of its orchestration. The great Afro-Peruvian musicologist Nicomedes Santa Cruz is known to have referred to it as “Your majesty, the cajón”.  In addition to the aforementioned styles, the cajón is also employed in other genres pertaining to the Peruvian coast such as the zamacueca, marinera and vals limeño.

Cajón literally means “box”, and as its name implies, it is a wooden box, 35cm wide x 20 cm deep x 46 cm high with a hole 10 to 12 cm in diameter in the back center. The player, or cajonero, sits on the cajón and produces 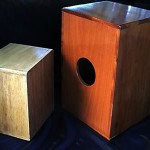 various percussive sounds by striking different parts of the instrument. A variety of sonorities are produced by combining its center (low pitch) and the top edge (high pitch) also known as the galleta. In addition, cajoneros can achieve different tonal dynamics by alternating between using their full hands, the heel of their palms and their fingers alone.

Other instruments characteristic of the genre are the quijada de burro, a real donkey’s jaw which when struck causes its loose teeth to rattle; the cajita, a little wooden box which is played by closing its lid with one hand while striking its body with a stick using the other hand; the cencerro or cowbell, palitos or clave sticks, spoons and guitar. While the cajón is used in all these styles, the rest of these percussion instruments are exclusively used within the styles of the southern coastal region. Today it is common to also include congas, bongos, shekere and even batá drums. Handclaps beating out different rhythmical patterns are commonly featured in all these styles.

Festejo which in Spanish means “celebration” is the most upbeat of the Afro-Peruvian styles. It is customarily notated in 12/8.

In festejo there are different golpes, a term associated in this case with a particular cajón pattern which in turn is named after the song that gave birth to it. Some of the most popular golpes are Alcatraz , Son de Los Diablos , Cumananá , and Ollita.

Also known as zamba-landó, this direct descendant of the African lundú rhythm is said to have been handed down from the bantú slaves who came from Angola. In contrast to the lively festejo style which traditionally is written in a major key, landó is often in a minor key and performed at a slower tempo. It is often notated in 6/8 or 6/4 although I personally believe the latter more accurately represents the slow nature of its pulse. In spite of this, I choose to notate it in 3/4 due to the simple fact that most musicians find it easier to sight-read.

It is said that the panalivio was originally sung by the slaves while working in the fields and later prohibited by the Catholic Church in the 18th century. It has a very strong resemblance to the habanera ,which was brought over by the Spanish colonizers to Cuba, Uruguay and Argentina (where it also gave birth to the tango and milonga) as well as various other parts of Latin America.

In spite of the fact that during times of slavery the panalivios were songs of pain and suffering, today its rhythm often serves as an accompaniment to the pregónes navideños heard in the town of El Carmen during the Christmas season. A pregón is a song performed by a pregonero or street vendor in which he proclaims the special qualities of his merchandise. These musical phrases are frequently songs that have been passed on from generation to generation and have become part of a given culture’s folkloric realm.

The panalivio is the simplest of the Afro-Peruvian styles and its orchestration usually consists of a cajón, a donkey’s jaw and a guitar.