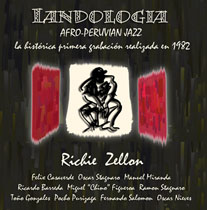 The Afro-Peruvian styles evolved from the music of the African slaves brought by the Spaniards to Lima during the early 17th century. Today Peru’s small black population is still concentrated in the coastal region south of Lima known as Chincha, where their ancestors first labored in the sugar cane and cotton plantations. This is also the birthplace of the two primary styles known as festejo and lando, which in 1982 served as the foundation for Peruvian guitarist Richie Zellon’s first fusion of jazz & Afro-Peruvian rhythms. This historical recording entitled “Landologia” has been digitally remastered and is now finally available on CD!

Hailed as “a milestone in Peruvian contemporary music” by Lima’s foremost newspaper, El Comercio, the recording
features some of Peru’s most prominent musicians.The rhythms are centered around the cajon, also considered the heart and
soul of Afro-Peruvian percussion. The melodies and accompanying harmony weave a delicate balance between the elements of the traditional genre and those of the jazz idiom.