“If you are wondering what the Beatles music fused with Afro-Peruvian rhythms sounds like, this recording will come as a surprising revelation. A pleasure from beginning to end!”
– Julio Garcia BBC Mundo 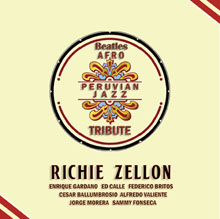 In addition to the 9 selections authored by Lennon, McCartney and Harrison, the CD includes “Serenata en Lando”, a piece written by Zellon in memory of his mentor, the late renowned Afro-peruvian guitarist and composer Felix Casaverde, who in 1981 accompanied him on his first recording (“Landologia”).

“A breathtaking album by Richie Zellon… This is a soulful, genuine homage to one of the greatest music ensembles of all time. But it is also one of the most revolutionary records by an artist who is, himself, credited by none other than Jimmy Heath, as creating (as far back as 1982), an idiom that has now come to be known as Afro-Peruvian Jazz. Labels apart, the record is a monumental achievement for its exquisite musicianship by Zellon on guitar and for his exquisite transcriptions in to a whole new realm as well as for his arrangements that retain the integrity of some of the most beautiful songs written by John Lennon and Paul McCartney.”

Acclaimed by the press in Peru:

“Although many are unaware, thirty years ago Lima born guitarist Richie Zellon invented Afro-Peruvian jazz … Today we are reminded of this with his tribute to Liverpool’s Fab Four in the style of Peru’s creole waltz, marinera, festejo and landó . It is an unparalleled experience… Lennon and McCartney could well have played the jawbone and the cajón … sounds like The Afro-Peruvian Beatles. This is not the work of a magician. It is the work of an artist, a visionary. Listen my friend! “
-La Republica (Lima)

“Zellon gives the Beatles’ repertoire the Afro-Peruvian treatment. The result is impressive for being respectful and daring at the same time … The thought of introducing an Indian drone in ‘Can’t Buy Me Love’ or transforming the experimental ‘Tomorrow Never Knows “into a marinera (Peru’s national dance) cannot go unnoticed. “
-Diario Oficial El Peruano (Lima)

“When we speak of fusion in Peru, the name of Richie Zellon is prominent … ‘Beatles Afro-Peruvian Jazz Tribute’, his latest album continues in the vein of fusion that he began in 1981.”
-La Primera (Lima)

Click here to purchase or listen to samples on CD Baby

This CD is also available for download from I Tunes and Amazon.