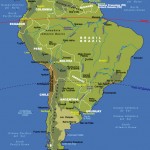 As we ushered in the new millennium we found that the world became a much smaller place. The internet became our primary means of international communication, giving us access to a virtual world in which cultural boundaries are non-existent. Today, what this means to the jazz improviser is that he now has access to a wealth of information never before available. The music of diverse cultures is just around the corner, waiting to be explored. As a result, we are already witnessing a series of new influences being integrated into the ever-evolving idiom of jazz. This should not come as a surprise to those well versed in the history of this music.

In the early 20th century, while still in its infancy, its roots were an amalgam of African and European influences. By the middle of the century, certain elements of Cuban and Brazilian music became part of the jazz musician’s vocabulary. Today, the unique musical styles of many other nations are rapidly becoming a new fountain of resources for the jazz composer as well as improviser. Undoubtedly in recent times, Latin America has become a force to be reckoned with when discussing the evolution of jazz. This is only natural due to the growing influx of Hispanics to the U.S. from different Latin American cultures. With Hispanics bound to become the largest minority in the United States, it is evident that more elements of Latin music will find their way into the 21st century musician’s vocabulary. And so the need is already arising to expose today’s musicians to the intricate rhythms and nuances found in the countless styles that permeate the continent south of our border.

As a Peruvian born musician, I have been intrigued by the rich existing variety of South American rhythms from early on in my career. Growing up with a Brazilian mother and American father, I was exposed to bossa nova, samba and jazz at home. As a young adult I developed an urge to explore not only the music of my native Peru, but also that of neighboring countries such as Colombia, Venezuela, Ecuador, Argentina and Uruguay. In the late 70’s I first began fusing the music of  Peru, both from the Andean and coastal regions with jazz. For the “coastal fusion”, I coined the term “Afro-Peruvian Jazz” which initially appeared in 1982 on my first album, “Retrato en Blanco y Negro”, later reissued on CD under the title “Landologia”.

In the years that followed I began to experiment with other South American styles from a jazz perspective. During the early 90’s, I founded Songosau’rus Music, a record label devoted to the propagation of artists who were also in a similar quest. It was during this period that I learned that the market did not readily accept this new wave of  South American jazz as “Latin Jazz”. At the time the term “Latin Jazz” was often reserved only for those artists whose music was rooted in the music of Cuba and the Caribbean. As a result I found myself having to use the term “South American Jazz” or “Sudaca Jazz” in order to fit in. “Sudaca” by the way is a term that has been used by Europeans (especially in Spain) whenever referring to one of the great number of South Americans that immigrated to that continent during the  late 20th century.

The following is a collection of writings on Sudaca Jazz and general South American music that were published mainly in the now defunct “JazzImprov” Magazine. Some of them have been updated to reflect the ongoing evolution of the music.  Enjoy!