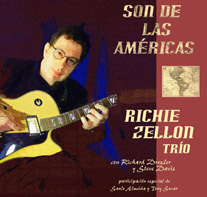 “It’s Imposible” might be best known as a slightly cornball hit by Perry Como, but the song has a double life as a bolero titled “Somos Novios”. For his first album in five years, Peruvian guitarist Richie Zellon casts the old chestnut and eight other Latin American songs into a jazz setting that accentuates their melodic qualities and offers up some fresh blowing potential. No longer a maudlin tune associated with the cardigan-sweater set, “Somos Novios” Latin roots are on the display courtesy of Zellon’s melodic accents and a rhythm that adds a slight gallop to the beat.

The traditional “El Condor Pasa” receives a modal, Coltrane-style interpretation that gets additional strenght from the addition of Saulo Almeida’s, cello to the rhythm section of Richard Drexler (bass) and Steve Davis (drums). All three string players solo on the track, with each reaching emotional peaks. Drexler’s strong tone provides some of the strongest moments in “Cielito Lindo” and “El Choclo”, the latter an Argentinean tango where guitar and bass gracefully alternate melodic responsibilities. “El Diablo Suelto”, a Venezuelan joropo with stop­on-a-dime shifts in melody, turns into a fast waltz marked by some of Zellon’s strongest melodic picking of the whole set. Son de Las Américas often runs the risk of getting too subdued at times, but closer investigation reveals the lyrical power of these tunes.
-JazzTimes (August 2006)